Until recently, Javascript had not had much of a module story, i.e., a good way of sharing code with others. I would say it doesn't have a great one even today.

You google for how to throttle in Javascript, and you get a blog post with 11 lines of magic you can copy-n-paste. Copy-n-pasting code into your project seems a little yucky - maybe better to fetch a file to clearly delineate your own code versus 3rd party code. Plus, if the author were to fix a bug or add enhancements in the future, you could straight-forwardly update the code. But, is 11 lines really worth it? Maybe not. It's almost faster to copy-n-paste those 11 lines than to download a .js file. You paste in the code and leave the blog url in a comment to let others and future you know where it's from.

Another possibility is you find the functionality you need from a more inclusive library. Underscore.js includes the throttle function out of the box. To use underscore.js in your project, you would:

This workflow is good - compared to what it used to be. There was a time when using a Javascript library involved these steps

It was a hassle. Most libraries have gone away from that, opting for the all-you-have-to-download-is-the-one-js-file approach, because it's much easier for the user. Now the user only has to add one <script> tag, and there is no guessing as to which .js file it is. This is why many libraries put the .js suffix in their name. It is a marketing tactic. It signals that there is just one Javascript file, so using it will be super easy.

Depend on No One

An unspoken rule in the world of .js files is depend on no one - that is, unless it's jQuery.

Today, you seldomly encounter a library that requires you to download other dependencies. People are impatient, and the more stuff you ask them to do before actually seeing things happen, the less likely they are to use the library in the first place.

If a library must have dependencies, what usually happens is: either they ask you to download a .zip file that contains all of the dependencies, or they concatenate the dependencies into a monolithic file along with the library itself. You'll see this with some libraries that depend on JSON parsing or base64 encoding, for example.

For the most part, we the library authors have shied away from depending on other libraries. This is a limitation. It makes it hard to stand on other's shoulders, but it also makes it hard to reuse our own code in multiple contexts - an effective way to remove code duplication. In this way, we have been handicapped for many years.

We Make an Exception for jQuery

Depending on jQuery though, is OK, because

Although, even for jQuery plugins, the "depend on no one" rule holds - you will seldom find a jQuery plugin that depends on another jQuery plugin or a standalone library. jQuery is what I call a god framework.

I call jQuery a god framework because without it, the universe ceases to function. In other words, everything depends on it. A dependency graph of a typical jQuery-based project probably has most - if not all - of it's modules pointing to jQuery. The only hope of getting by without it is to replace it with something that works exactly like jQuery, a sort of clone. Zepto is exactly that, and it exists probably because someone had gone to great pains to rid themselves of jQuery.

jQuery is not the only god framework though, not by far, it just happens to have decisively won the First Great Framework War. All frameworks more or less want to be god-like. One tell is if it has plugins

If you have a plugin ecosystem, you might be a framework.

The Javascript world is dominated by frameworks, and it is because of our reluctance to having dependencies in our libraries. If you are going to write a Javascript library, you have two options:

If you choose option #1, you contribute to the worship of the framework.

If you choose option #2, you are faced with a problem. If you make it too small, it may not be useful enough to warrant a download (are you download-worthy?). What happens sometimes is a set of smaller functionalities get packaged up into a larger library to give users more value for the download. Another thing that tends to happen is established libraries get bigger over time as new techniques are discovered and new features invented, because this makes it easier for existing users. Examples of this are

This. This is why the Javascript world is dominated by frameworks. There is good reason why jQuery is a Swiss Army Knife: tons of features in a single download equals convenience.

As someone who likes to write small libraries, the dream for me, is this: I want easy dependencies: regardless of how many dependencies and/or nested dependencies my project has, I want to be able tell people "using my library is as easy as 1-2-3."

The Beauty of NPM

The rise of Node.js and with it, NPM - the Node Package Registry has been an important development. NPM is a joy to use, and has made publishing server-side Javascript modules really easy. It has made dependencies easy, both for module authors and users.

If you want to add Express to your project, just install it with the command

If the module depends on other modules, they are automatically fetched recursively for you - you may not even notice them if you don't pay attention to npm's console output. Node developers take full advantage of dependencies. This is the dependency graph of express, the server-side web framework. 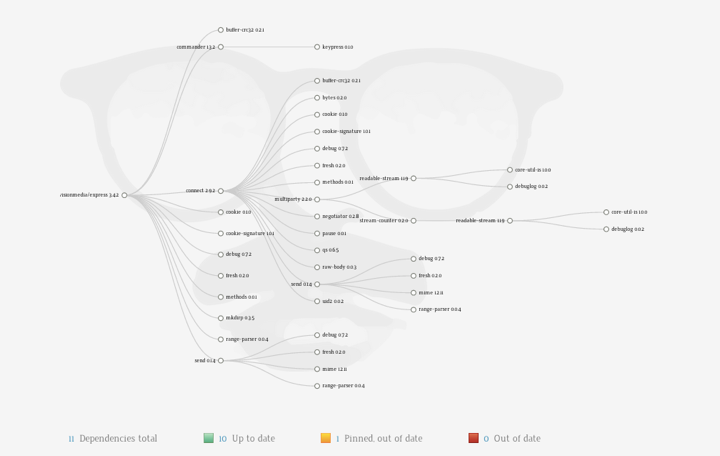 NPM has re-taught us that modules do in fact, work, and that it works in Javascript. It has flourished beyond expectation. In just a few years, it surpassed CSPAN and PyPI in number of packages, and that number grows at a consistently higher rate than the module registries for any other programming language. (source)

The NPM community of modules embrace smallness. Small modules have these characteristics

Medium answer: it's a race to the top, and the front runners at the time of writing are NPM with Browserify and Bower.

Browserify is a tool that allows the CommonJS module system to be used in the browser. It does require a compilation step, but this step can be automated away. Browserify works great with NPM, and there is an increasing number of client-side modules on NPM.

Bower is a newer module registry for browser code. Bower does not have an opinion about module formats. To install a library, Bower simply fetches the contents of a git repository. It is up to the users to decide what module system they want to use and how they want to consume the fetched library, whether it's CommonJS, AMD with Require.js or simply <script> tags.

Component is the contender in third place, but nevertheless has accumulated many useful modules. Like Node, it is based on CommonJS.

Small Modules in the Wild

Despite the fragmentation in the frontend Javascript package manager space, their availability is giving rise to reusable modules in smaller chunks. Here are some examples of this at work

There are still many questions in the air, not to mention fear, uncertainty, and doubt. Questions like

Some of the modules mentioned above use CommonJS while others use AMD, some support both, some neither. Without everyone agreeing on the one true way to write modules, how can we move forward?

Go Forth and Publish

My answer to that question is: do it anyway. Pick the format/tool you like and go for it. The important thing is that you can

The landscape of Javascript libraries is changing - it's becoming more modular. Once there is a lot of value in this newer space, consolidation will probably happen, but until then, let's put more value in there!