Writing programs to do static analysis on Javascript is easier now than ever, thanks to Esprima - the Javascript parser library. In this post, I'll demonstrate how to use Esprima to do something fairly simple - detect accidentally leaked global variables in a program.

Accidentally leaked global variables happen when a value is assigned to an identifier without declaring the identifier as a variable first. For example, this g = 1a accidentally makes g a global, but var g = 1; and var g; g = 1; do not.

But before we do all that, let's start with the basics.

Esprima's job is to turn a Javascript program into an AST - Abstract Syntax Tree. An AST is a tree representation of the source code that can be inspected programmatically. For example the AST for this program 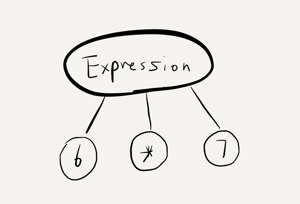 The output you get from esprima is a bit more detailed, but is nothing more than a nested Javascript object

To get an even better idea, I recommend you go play with the Esprima online parse for a bit. When you type in a valid Javascript program on the left, and you'll immediately see its AST on the right.

Back to the task at hand. If we want to find all the assignment statements, we'll need to be able to traverse the AST. AST traversing is slightly tricky because there isn't a unified interface for getting the children for a given node. For example, an VariableDeclaration has nested children nodes within declarations while an IfStatement has nested children within its consequent and its alternate. Moreover, some properties contain objects, some arrays, others contain strings.

Thanks to the power of Node modules, we'll just use the Estraverse module to do that for us. To use Estraverse:

Now that we can traverse an AST, we need to know what to look for. What does an assignment look like? To find out, put into the online parser "g = 1" and we find that we just have to find all nodes of type AssignmentExpression, and then get at its left.name. Let's try this.

First, let's create a new directory for this project, and install both Esprima and Estraverse.

Now, create a assignments.js and write

This program will take the input file name as its a parameter and report for each assignment in the program, which identifier was assigned to. As a test, make a file example1.js

The next step is to find out whether a given identifier being assigned to has been defined as a variable within that scope. But first, let's revisit how variable scoping works in Javascript. In Javascript, other than the global scope - the default variable scope for code that doesn't belong to any function - the only thing that creates a new scope is a function.

Here's a way to visualize the scope chain above 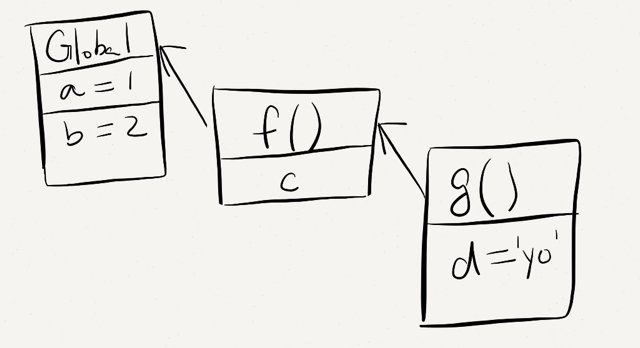 In order to figure out whether an identifier is defined within a particular scope, we need to not only collect all variables declared within the scope itself, but also of all its ancestors. In order to do this, we'll need to maintain our own scope chain as we traverse down the AST. This will be fun.

First, write a function that tells us whether a given node creates a new scope. We are interested in three types of nodes

We'll use an array as a queue for storing the scope chain.

As we traverse each node, in the enter function, we add a new scope - for which we are just going to represent as an array of variable names - to the scope chain whenever we encounter a scope-creating node.

When we see a variable declarator, we'll push it into the current scope

Next, using the leave hook of Estraverse - called when all the children of a node have been traversed - we can find out what variables have been declared within that scope just by printing it out. We also dispose of the current scope using array's pop() method on the scope chain.

But we can make the output give more context here if we also print out information about the node. So let's instead write a printScope() function and substitute printScope(currentScope, node) for console.log(currentScope)

Now, if you run that script on this input program:

You should get the output of

Notice that the output starts with the innermost scope and ends with the outermost scope. This is because we finish collecting the variable declarations and print them out on leaving a node, rather than entering it.

Putting it All Together

Now that we have the scope chain reverse-engineered, we can query it to see whether an variable was define when it was assigned a value. We'll make a function isVarDefined() like so

After this, it's a matter of collecting all the assignment statements within the current scope in an array, and then checking all of them for defined-ness.

We'll need an array to collect all the assignments done within the current scope, because the check must happen on leaving a node - the point when the scope chain fully materializes.

Inside the enter function, we collect all the assignment expressions nodes into it

Then in the leave function, we check for any global variable leaks

If you run the it against the following input program

But, wait, there's more! Esprima can also give location information about each node in the AST, so that we can output the line number for each of the leaks we found. We just turn on this feature by passing in {loc: true} as the second argument to esprima.parse(). See the docs for all esprima options.

Next we need to modify the code to keep track of all the leaking nodes so that we can actually get at their locations when we need to. So we change the line

And then we modify checkForLeaks() to print out the line information:

There are some additional problems with our code still:

Your assignment is to make the global variable detector work with these two cases as well. To submit your homework, put your solution on Github and post it in the comments.

I can tell that you can't get enough of this static analysis stuff!! Here are a couple more problems to satisfy that appetite

As with the homework, please post your solutions in the comments.